Three legged version of the Cabinet realized for the Eighth Secession Exhibition, in 1900 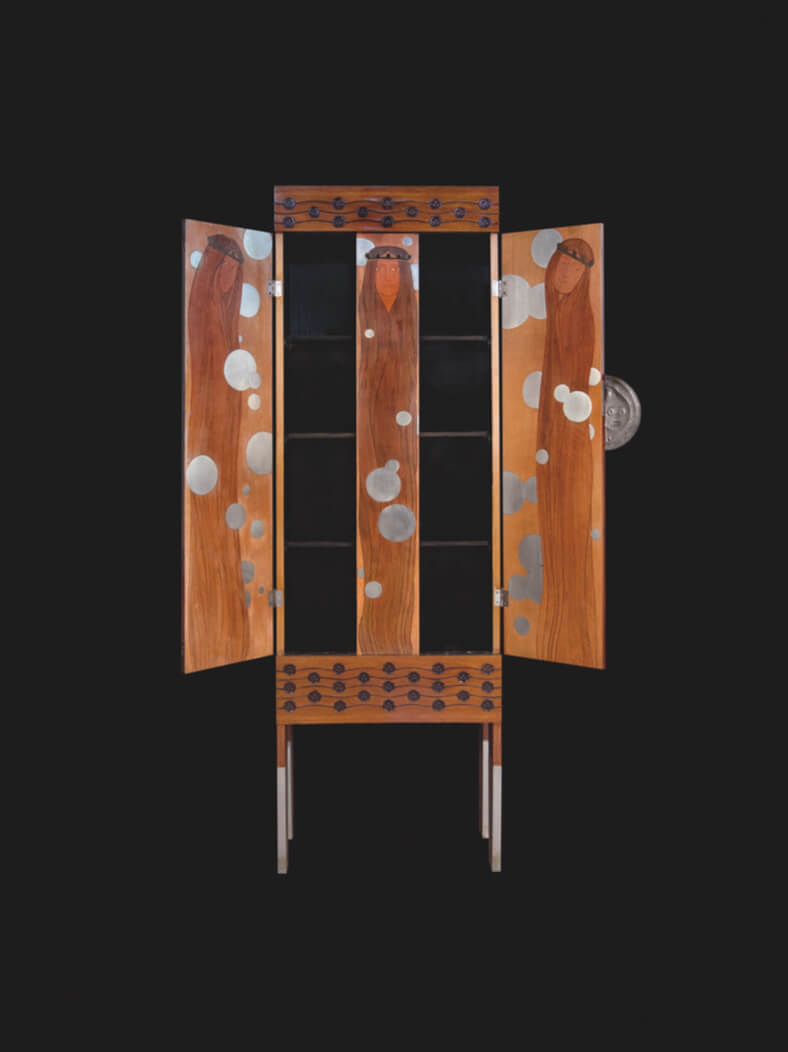 Moser is renowned alongside Josef Hoffmann as one of the foremost designers in Vienna around 1900. A founding member of the Secession, he represents the ideal of a synthesis of the arts inspired by the English Arts and Crafts movement, which elevates the applied arts to the same creative level as the fine arts. Having studied painting at the Vienna Academy of Fine Arts, in the late 1890s he shifted his focus to designing textiles, glass and ceramic works. He exhibited his first executed designs for furniture at the 8th Secession Exhibition (November to December 1900), where, alongside the sideboard Der reiche Fischzug (The Rich Trawl) and a cigar cabinet, he also presented Die verwunschenen Prinzessinnen, the cabinet discussed here.

The art critic Ludwig Hevesi commented on 10 November 1900 on Moser’s latest sphere of artistic activity: ‘The most Moser-ish of all however is a corner cabinet called The Enchanted Princesses. We can in fact see three slender maidens inside it, with gold bands in their endless hair, spellbound in intarsia, not without some scattering of those silver discs and pearls of dew that so lovingly and discreetly contribute to Moser’s work.

Outside a fish monster serves as escutcheon and elongated, iris-coloured tears flow down the door wings.’ This report might be mistaken for the description of a painting – Moser even gives the furniture a title, an approach that breaks new ground in Vienna. We appreciate this more when we realize that the Secession artists were strongly focused on individualistic artistic expression within the context of the unity of the arts. Consequently, from the point of view of a painter, it behoves an artist to provide a title casting light on his creative concept for a piece of furniture. Moser’s furniture is not content to be part of a conventional, uniform interior design concept dictated by sets and ensembles. It stands out in its surrounding space like an individual, solely definable by its quite personal attributes, similar to a sculpture or painting. It no longer represents the so-called ‘good taste’ of the old aristocratic society, whose success depends on the fulfilment of a given standard and not on the fulfilment of personal needs. It has a voice and uses it. Whether someone wants to hear it or even finds it beautiful, is not the determining criterion here. The decisive point is that Moser makes use of furniture to give personal feelings a public voice. In doing so he breaks a taboo against traditional social rules. 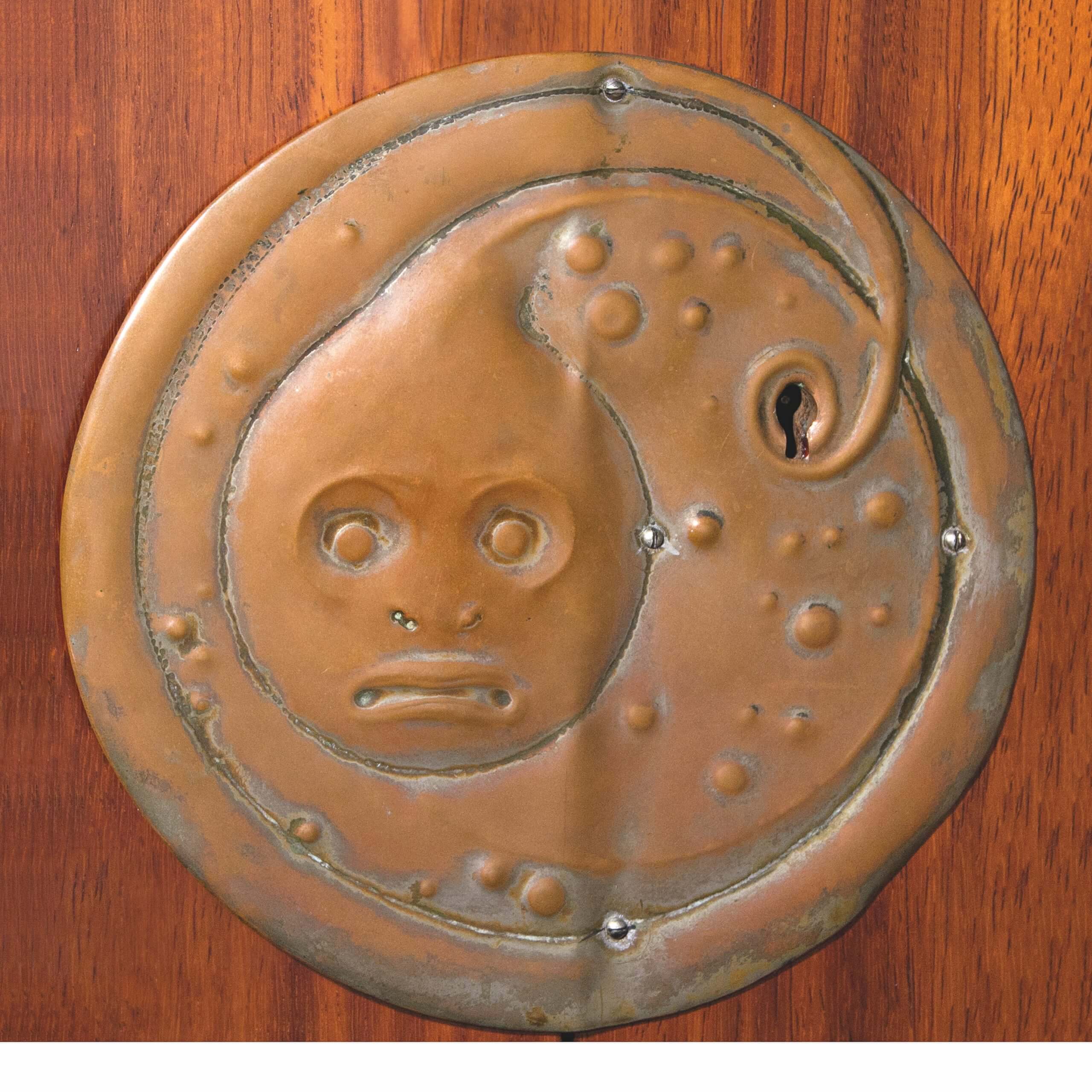 Neither does the cabinet correspond to the usual ideas of haute-bourgeoisie, not to mention aristocratic prestige. Moser gives the board – as primary constructional element of an item of furniture – aesthetic significance. He doesn’t process it by giving it frame and filling, as accords with tradition. Nor are the individual surfaces defined and limited by mouldings as framing elements. The furniture is placed neither on a base nor crowned with a cornice. The smooth board remains the elemental medium of the craft of cabinet- making. We only have to look at the legs, attached as boards that continue the side walls and hence only appear at the cabinet front as thin posts; or, instead of a cornice or base, Moser has shallow-carved boards beginning and ending on the same level as the cabinet’s front and side walls. For Moser, the painter, the board is a support for a painting and instead of a painting technique he uses wood marquetry in order to express his pictorial idea. This is manifest only when opening the cabinet, like a medieval retable. In the centre of the cabinet opening Moser places a small board with the frontal depiction of a princess. Indicating that the outer sides of the two doors are primarily pictorial substrates, he scatters raised and asymmetrically arranged tear-shaped glass droplets across the front.

Moser’s cabinet model Die verwunschenen Prinzessinnen was conceived for the 8th Secession Exhibition as a three-legged corner cabinet and subsequently made in a four-leg version by the furnishing and interior decorating firm and furniture manufacturer Portois and Fix. Born of the conviction that artistic expression has the capacity to enhance the quality of people’s everyday life, the question of whether it is a piece of furniture or a work of art is no longer relevant here. Both fuse with each other as a self-evident unity.