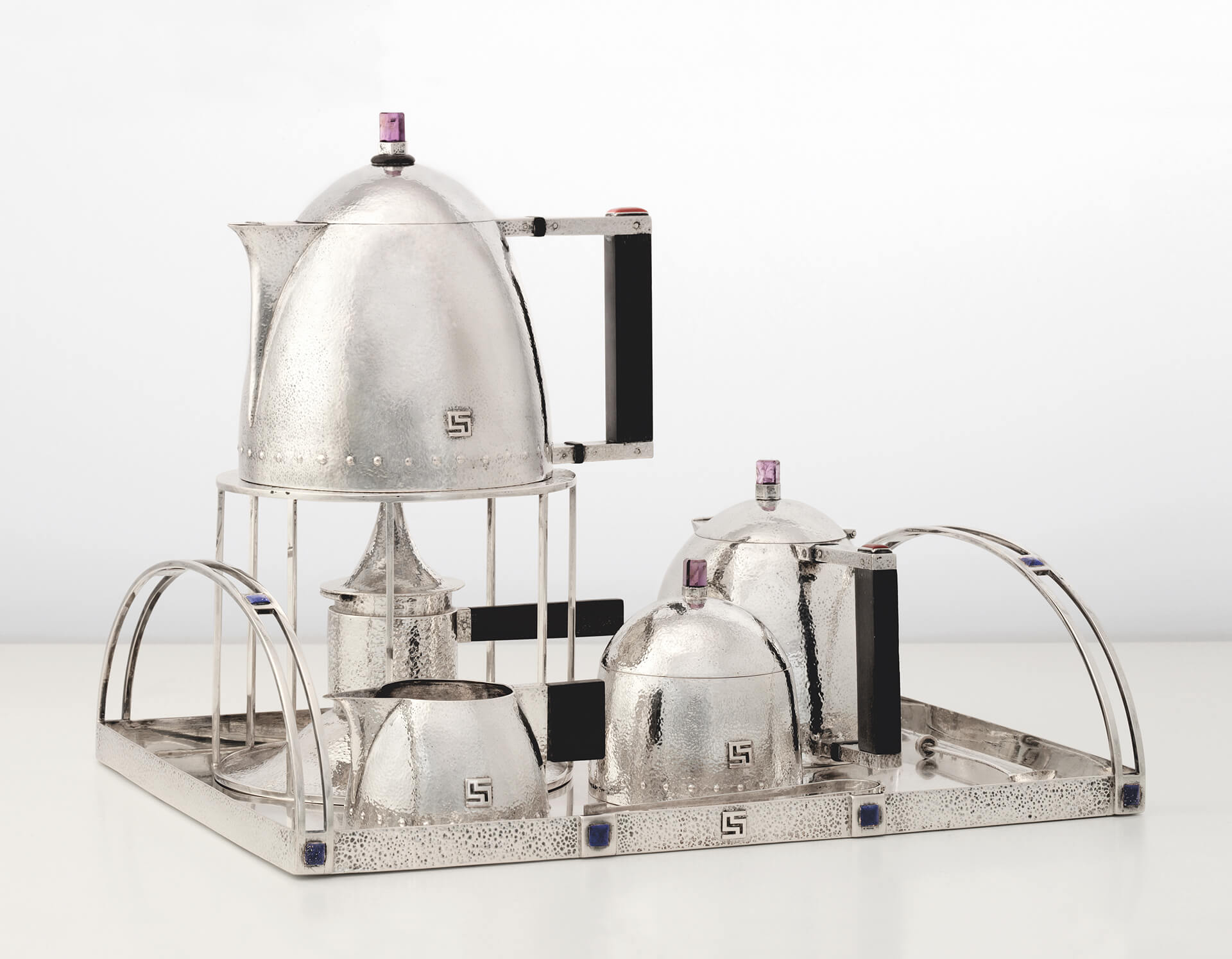 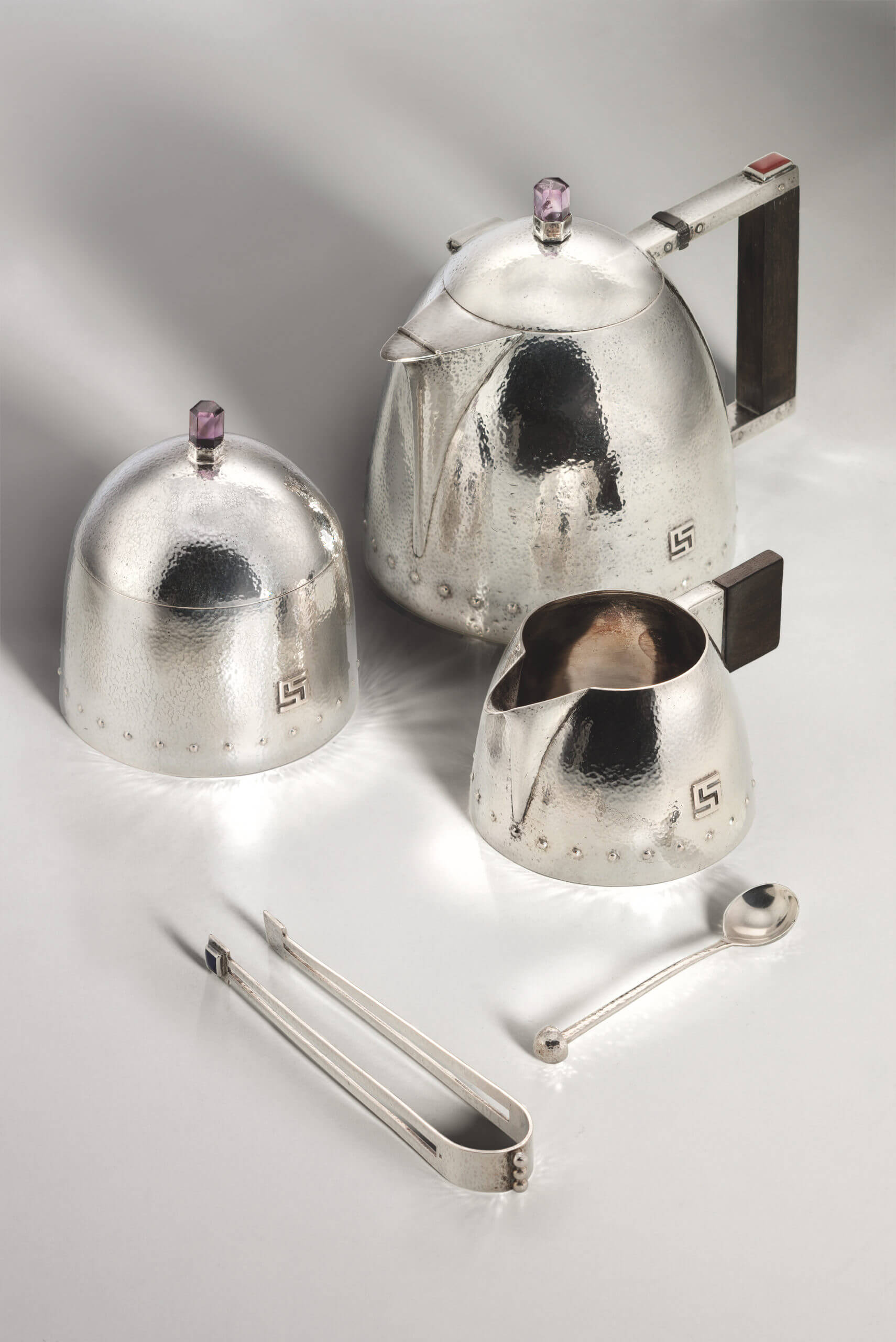 In 1904 during his stay in Vienna, Adolphe Stoclet purchased the samovar, the tray and the tea service at the Wiener Werkstätte for his wife Suzanne, paying 910 crowns for them. Her monogram “ss” adorns all parts of the service apart from the sugar tongs. While the wiener Werkstätte produced the samovar with matching stand as a unique, one-off piece in 1904, in the same year it manufactured another exemplar of its teapot without stand. Two exemplars of the tray were produced in 1904 and 1905. In 1904-05 three exemplars of the teapot were produced, and two of the sugar bowl, the milk jug and the sugar tongs.

Adolphe Stoclet came from a rich Brussels banker family and, along with his young family, spent the years 1903-04 in Vienna on business for his paternal bank concern. His son Jacques was also born here. With the founding of the secession in 1897 and the wiener Werkstätte in 1903, Vienna was becoming established around this time as one of the leading and most innovative european centres of the arts. Stoclet, an art lover and collector, got to know Josef Hoffmann during a walk on the Hohe Warte. Hoffmann had built three villas there since 1900, including the semi-detached house for the painters and secession founder members Koloman Moser and Carl Moll. At this point in time, they represented the most progressive forces in architecture that Vienna had to offer. Since Adolphe Stoclet had been planning to spend quite some time in Vienna, he commissioned Hoffmann to make plans for a house to be built on the Hohe Warte too, in the location of the present-day villa Ast. However, because of his father’s sudden death Stoclet had to return to Brussels in 1904, and the project was shelved in the planning stage. These initial contacts in the end yielded one of the most important and comprehensive commissions for the Wiener Werkstätte: the building of the Palais Stoclet, executed between 1905 and 1911 in the avenue de Tervueren in Brussels.

Works in metal from the early years of the Wiener Werkstätte such as this service with samovar are among the icons of the history of the modern decorative arts. They embody in ideal form the radical revolution in approach shown by this generation of artists in the direction of a stylistically autonomous utility object, unique according to criteria of artistry and craftsmanship, on par with a work of art. The object’s value is not determined by richness of ornamental invention or material value, but proportion, choice of material and handcrafted perfection. The marks of the designer Josef Hoffmann and the executing silversmith Alfred Mayer are stamped as equals into each object in the set.

The tea service with samovar and tray is one of the few assured records of the first contact between Stoclet and the Wiener Werkstätte and for the start of a business connection in which Stoclet was to become one of the leading patrons of the Viennese avant-garde around 1900. The pieces provide a superlative example for the radically reduced stereometric design and perfect execution of the early works of the Wiener Werkstätte. 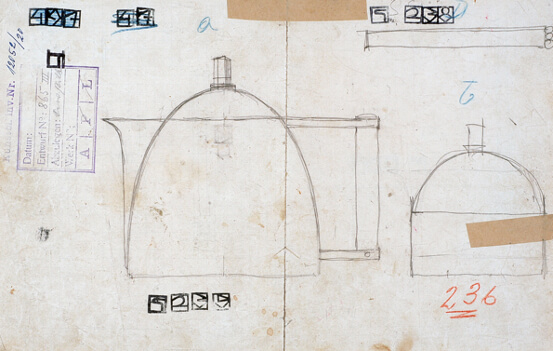 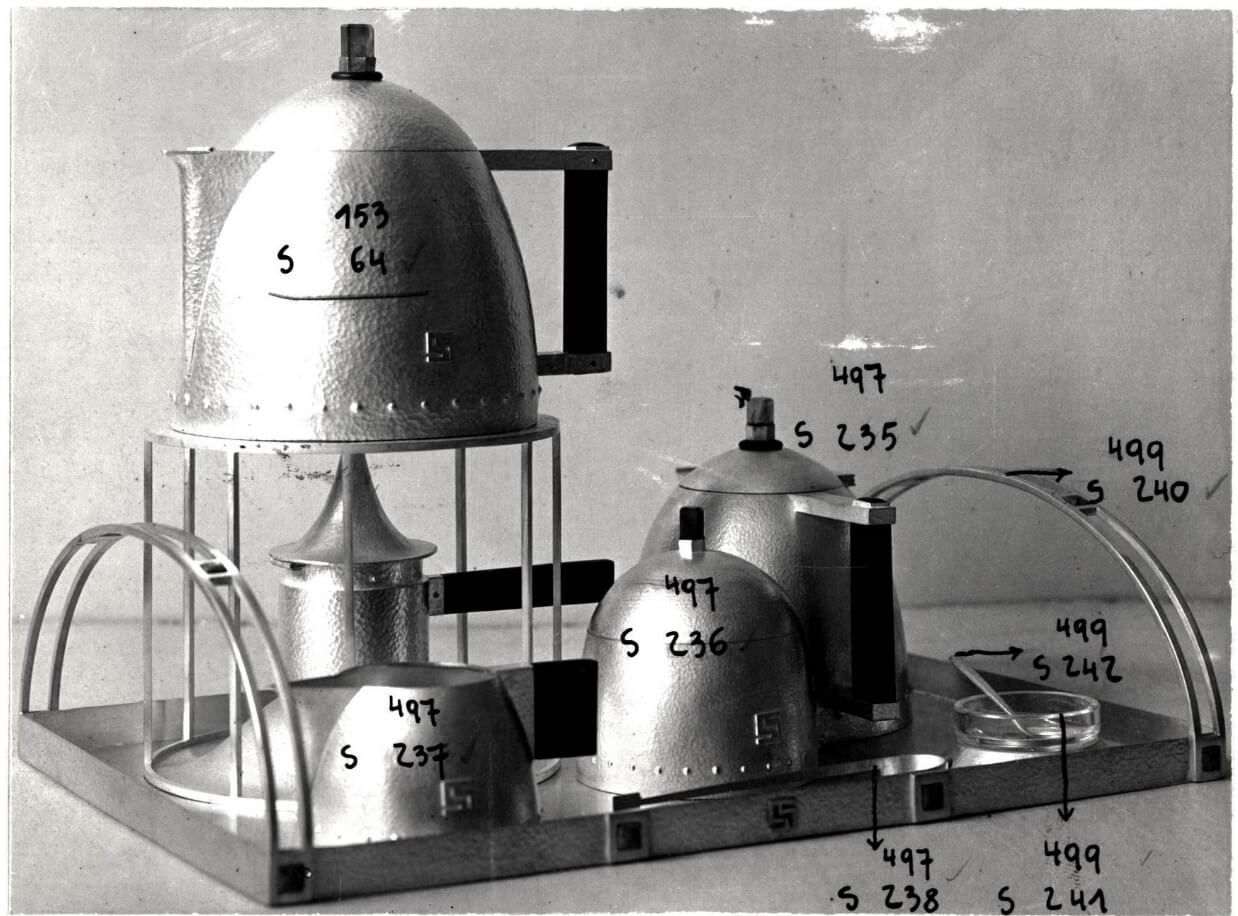