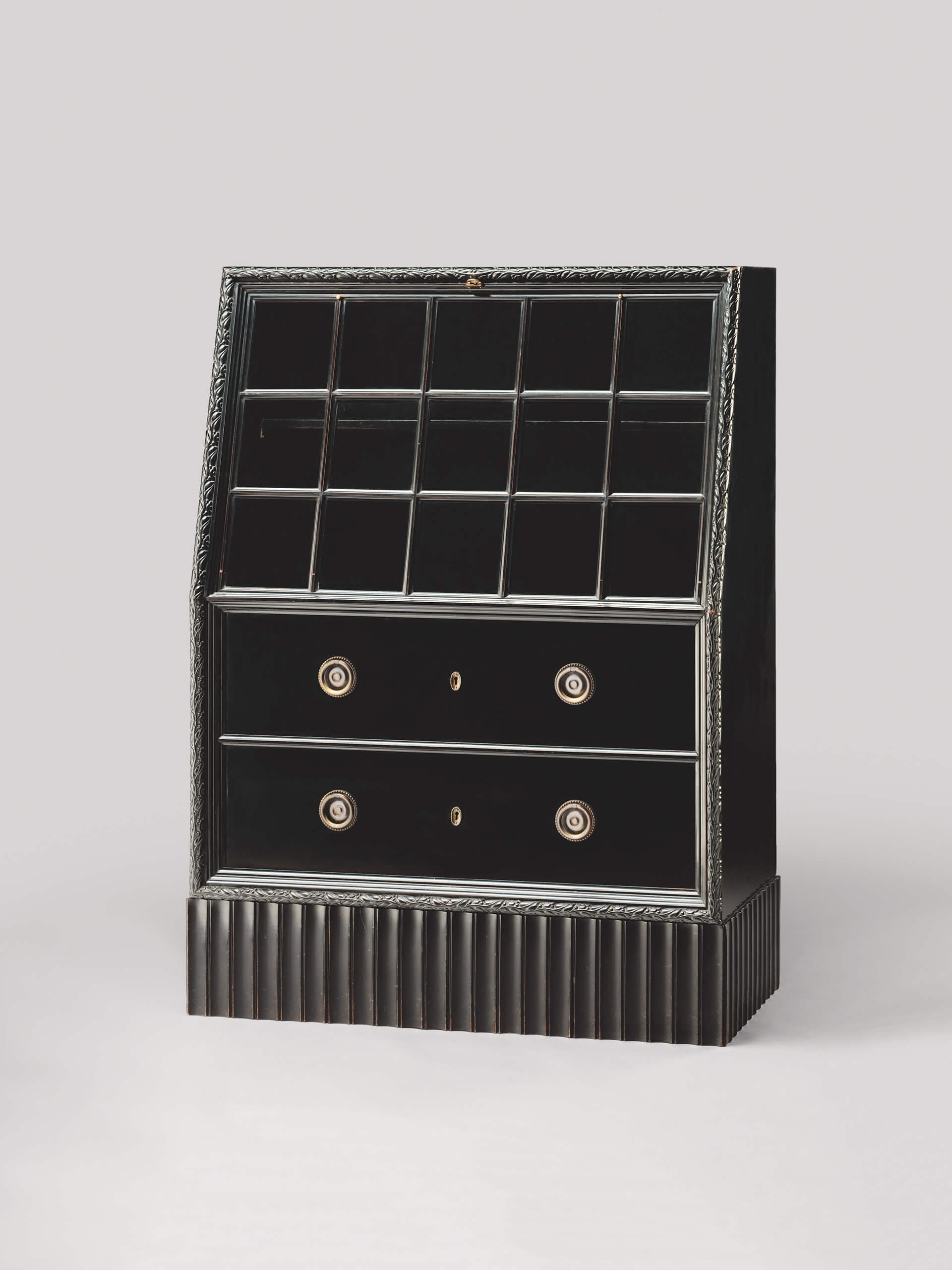 2 pieces made, one known to date

The Austrian Building at the Deutscher Werkbund Exhibition, Cologne, 1914 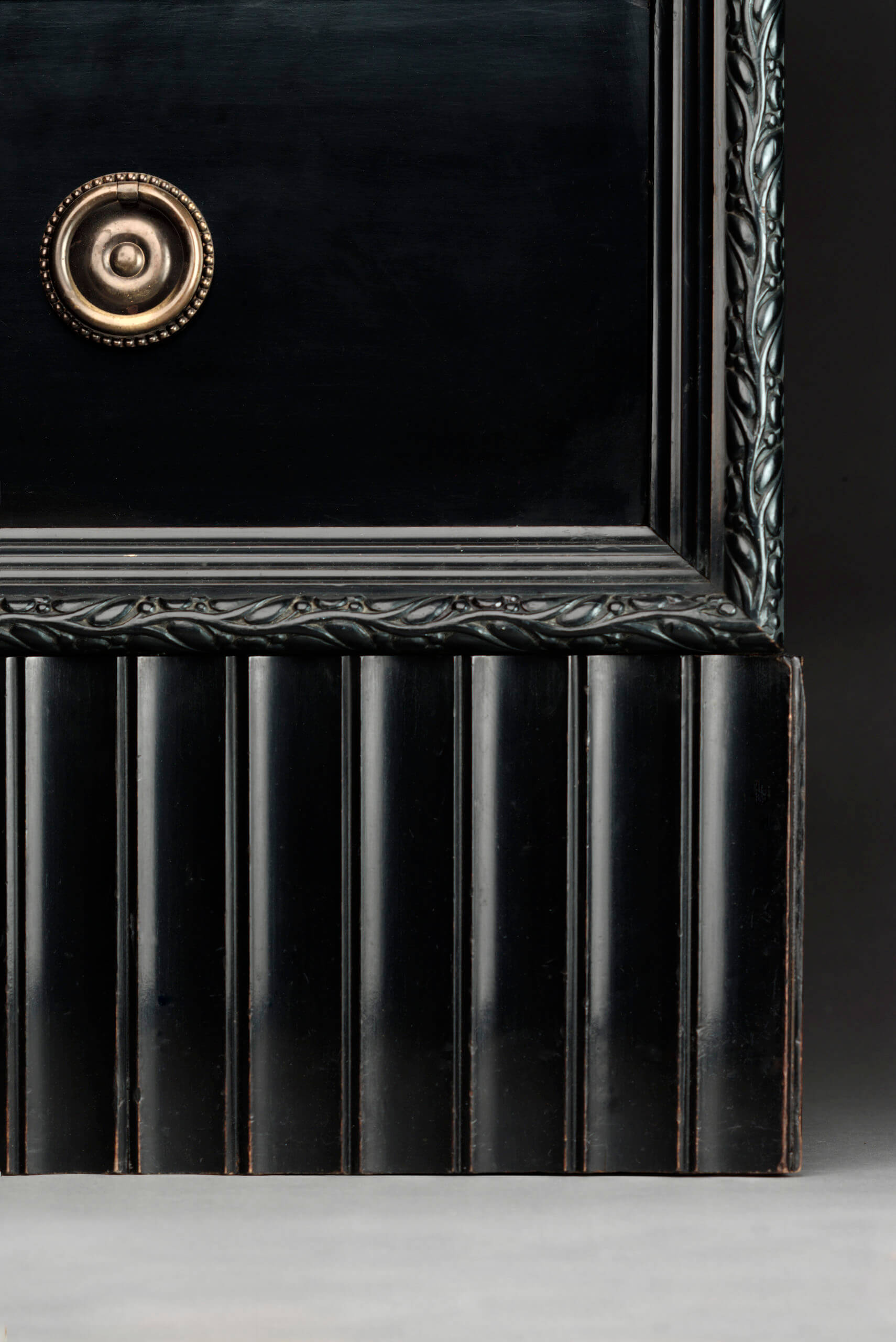 The display cabinet was part of the interior furnishings of Room III, the so-called reception room of the Austrian Building at the Deutscher Werkbund exhibition in Cologne, 1914. Like the entire architecture of the Austrian Building, it was designed by Josef Hoffmann and represents the peak of his classicist phase, signifying the development of a monumental style by borrowing from the classicist repertoire of forms. In doing so he discovered his own independent, ambiguous aesthetic idiom, which was clearly remote from its emphatically tectonic, classicist roots and hence became one of the inspirational sources of post-modernism in the 1970s.

As so often with Hoffmann, this cabinet is part of a carefully composed, integrated concept of interior design. The display cabinet is one of two which stood opposite each other on the narrow sides of the reception room setting. Their positioning on the wall is determined by two vertical mouldings taking up the total height of the room; these simultaneously define a very shallow and extremely high recess. Hence the furniture has to be interpreted within this architectural context in order to generate its full and intended effect. Within the thin, black framing system of the wall it is at first fleeting glance a massy, black block, standing in glaring opposition to the lightness of the individually sectioned wall structure. But this is just the interplay of contradictions that Hoffmann constantly exploits in his designs in order to engage our attention as observers. He doesn’t work according to the accustomed recipes of our intuition for aesthetic harmony. He uses irritations, as in the concepts of space-surface, strength- weakness, softness and hardness, which deliberately allow the collision of opposites and thus generate unexpected tension. Yet he is able to convert this tension into harmony by rigorously continuing the contradictions throughout the total design. In this way he can generate a new, subjective kind of harmony, which is discovered afresh each time by user or observer and thus cannot avoid being experienced.

A perusal of the display cabinet enables us to solve this interplay of opposites as follows. The high, fluted socle of the cabinet is in its totality clearly horizontal as a structural element, yet Hoffmann forms it out of vertical elements. Only the rowed arrangement of this fluting – open at top and bottom – effects a clear, horizontal alignment. The cabinet itself is made of two functional elements, which however are not emphasised as such in form. The part below with the two drawers might be interpreted as socle and forms a unity as a front with the slanting display part above. Hoffmann connects these two spatial components by emphasising the front side of the cabinet with a foliate, volute border. The observer’s attention is therefore focused entirely on this show side and thus on the display contents. The side walls of the cabinet show neither the slightest decoration, nor a visual separation of the two functional elements. Although spaceencompassing, the accent of the total impression made by the cabinet is on the flat surface. So he succeeds in making an otherwise mobile piece of furniture into an optical part of the wall surface. This intention is underlined even more in that Hoffmann gives the entire room a high skirting board, which is identical with each of the furnishings in material and form, and thus binds the furniture optically to the wall. 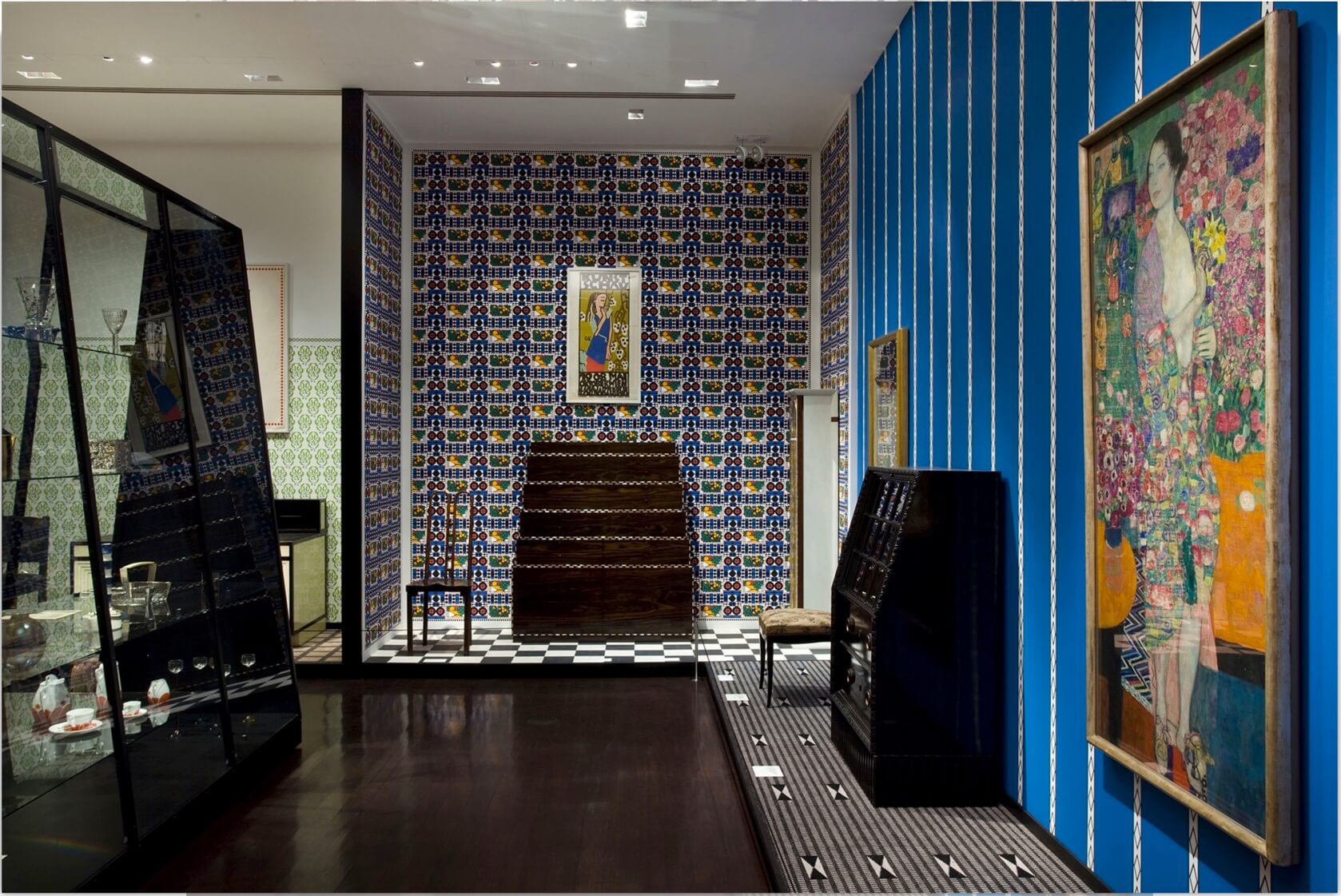