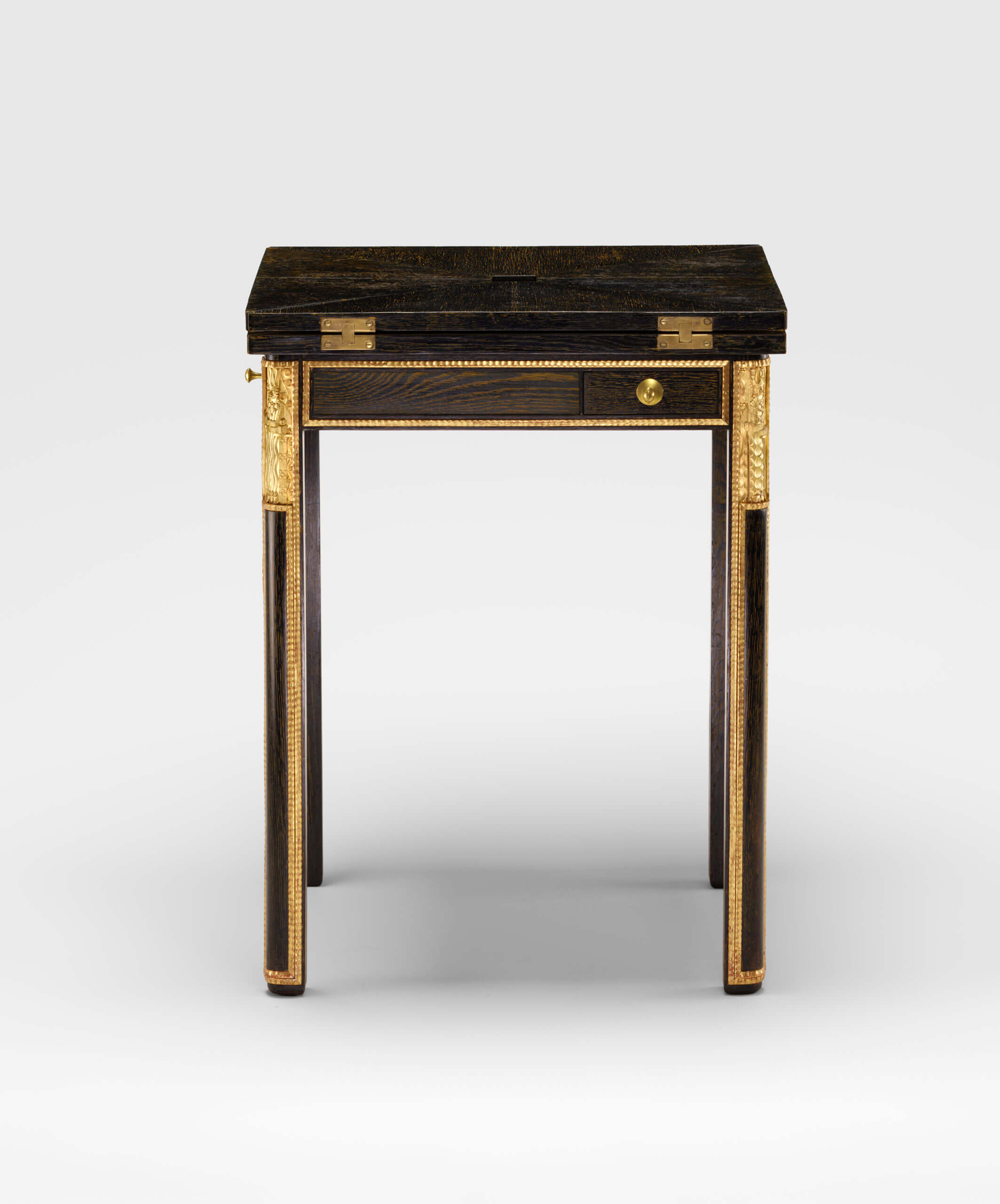 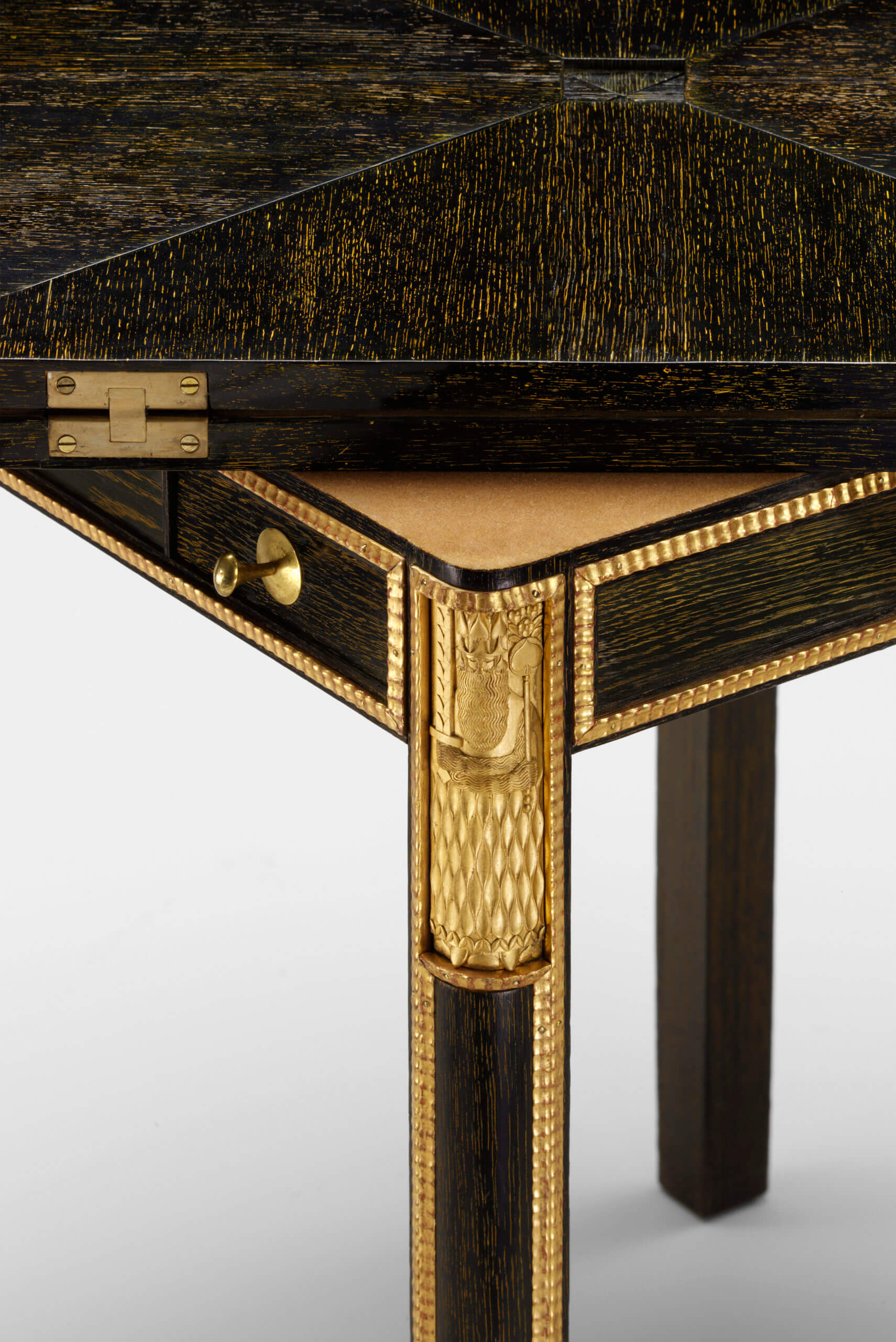 The Wittgenstein family, originally from Gohlis near Leipzig, had lived in Vienna in the first generation since 1859. Their economic and social ascendency took place during a period when the arts in Vienna were in full bloom. In 1880, Karl Wittgenstein (b. 1847 Leipzig – d. 1913 Vienna), the most economically successful son of Hermann Wittgenstein, set up what came to be the largest iron and steel foundry in the Austrian monarchy. After a world tour lasting three months, in 1898 he gave up active management of his business and retired at the age of 52. His assets alone in stocks had accumulated to the then enormous sum of over two million guilders. Freed from the huge work pressure, Karl Wittgenstein, without neglecting his already very active social commitment, turned his interests to the sponsoring of the newly blossoming art scene in Vienna. In 1897, a number of the most progressive young Viennese artists had founded the “Association of Austrian Artists – Secession”; these included the painters Gustav Klimt and Koloman Moser and the architects Joseph Olbrich and Josef Hoffmann. Wittgenstein’s financial support enabled them in 1898 to build their exhibition and association building, the Secession, designed by Olbrich and ever since the architectural symbol of Vienna’s artistic renewal around 1900. From the very beginning, Karl and his artistically gifted brother Paul Wittgenstein were among the leading patrons of the young Secessionists and also of the Wiener Werkstätte, subsequently founded in 1903.

Hence over the years a whole series of interior designs, conceived as total works of art, were created for various members of the family.

Karl Wittgenstein ordered the games table shown here in 1906 from Josef Hoffmann for his palais in Vienna 4, Alleegasse 16 (today Argentinierstrasse). It is one of three examples likewise made for him between 1905 and 1907 by the Wiener Werkstätte with the same constructional principle but with different decoration. The first and simplest table in form was an integral component of the inglenook in Wittgenstein’s hunting lodge Hochreith, an interior conceived by Hoffmann in 1905 as a Gesamtkunstwerk, a total work of art. The two later tables were unique pieces and much more elaborate, for they had to compete with their ambience in the late historicist palais on Alleegasse. The 1906 table differs from that of Hochreith solely by the addition of carved and gilt vertical flat reliefs on the top end of the four legs. In contrast, the third table of 1907 has the same stature and dimension, but uses more precious materials (Makasser ebony veneer, ivory and mother-of-pearl) and decorative techniques (marquetry). 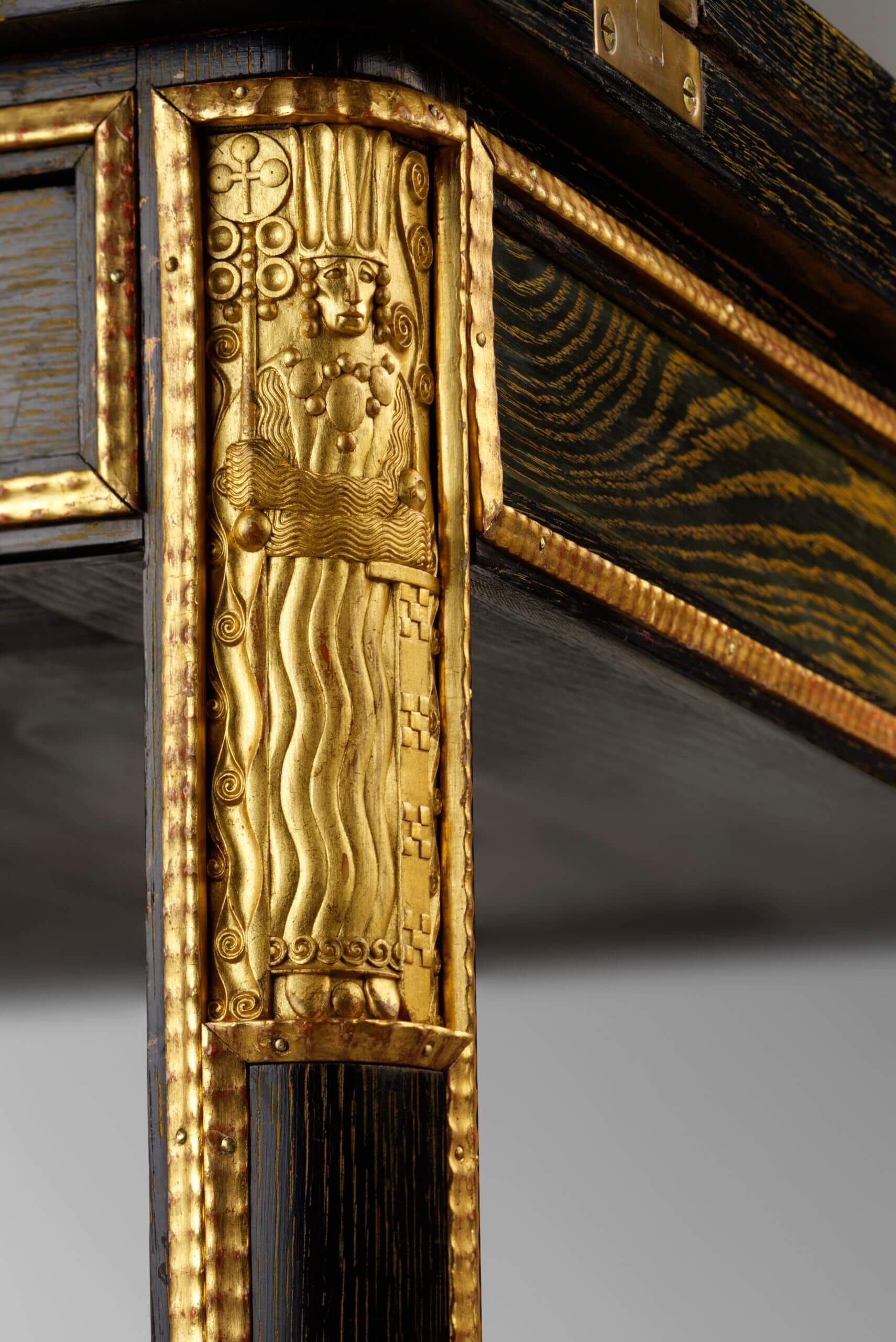 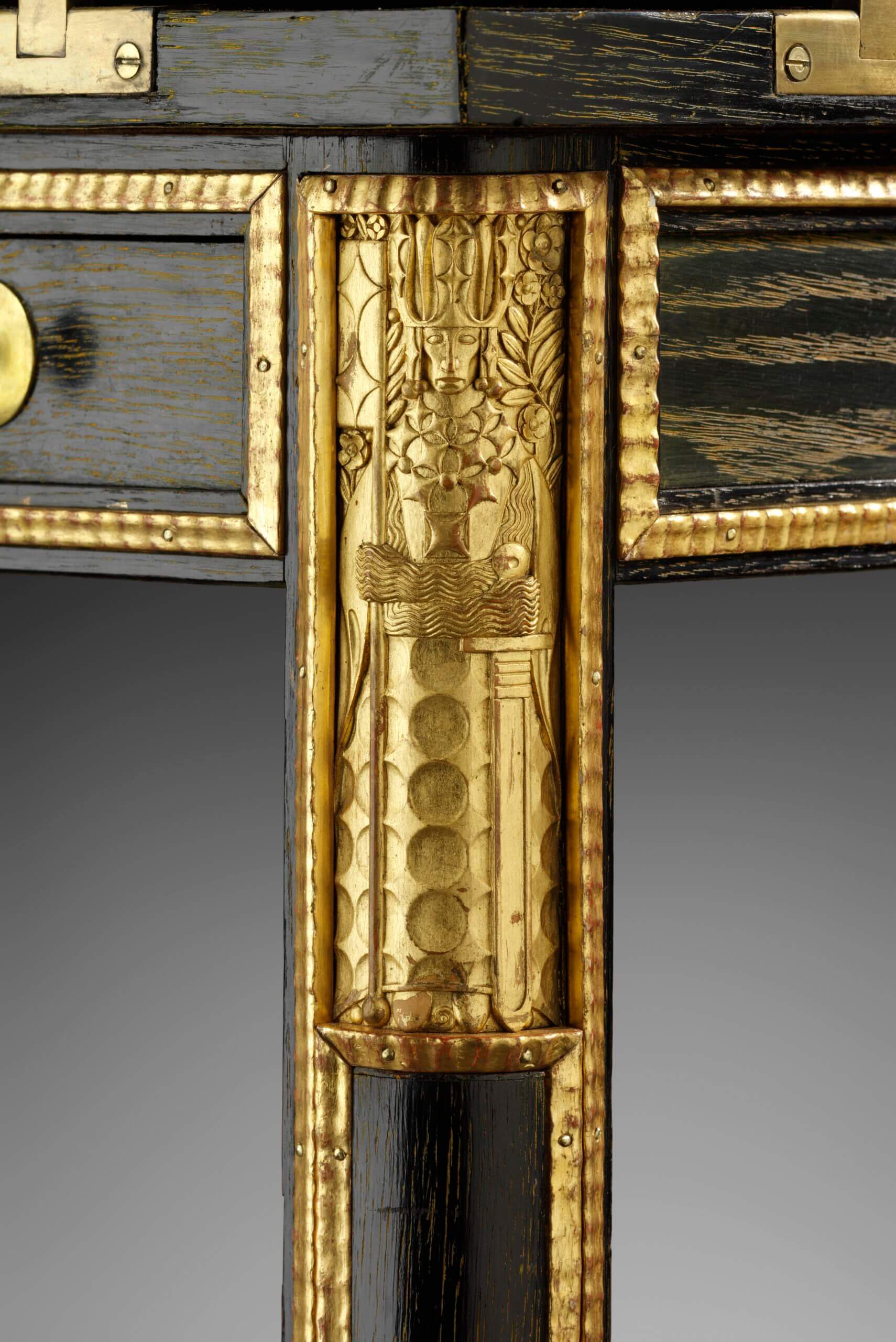 The table has a square top and can be extended to double its size. To do this, four right-angle triangles, which form so to speak a second square tabletop when folded, are opened up from the table centre and placed in a horizontal position. After this procedure, the tabletop is no longer parallel to the apron, but aligned to it at a 45° angle. To facilitate the opening up of the four triangular segments, their points have been sawn off to half their thickness. When these four opened-up triangles converge, they form a small, square depression in the tabletop centre, simultaneously grip hole and decoration. The apron is fitted between the four legs, which are square but rounded off on their outer edges. A small drawer is fitted on each side of the apron at the right, taking up a third of the length. The clear, plain contours of the table are based on geometric forms, but the subtle framing effect of the narrow, gilt ripple moulding adds to them an accentuation with it a life of its own independent of the table. This produces two complementary tectonic structures. One forms the basic structure of black-stained oak wood, whereas the second takes shape as a structure quasi hovering on the first. The hovering effect is primarily generated by the fact that the gold moulding is not mounted on the outermost edge of the legs and the apron, but shifted somewhat to the inside, thus allowing the black substrate material to shine forth. Thus the apron is no longer in direct visual contact with the legs and appears to hover underneath the tabletop. The framework bottom formed by the legs is raised up somewhat from the ground, yet again divesting the legs of their tectonic purpose of support. Last but not least, the three-dimensional, gold-gleaming frame structure simulates transparency, for, in contrast to the smooth black substrate material, it is only applied and not conceived as an integral component of the table construction. This impression is reinforced by the gilt flat reliefs designed by Carl Otto Czeschka attached to the top fifth of the legs, each representing one of the four playing-card kings. Their correspondence in colour and material to the ripple moulding makes them form part of the framework structure and simultaneously the capital of a transparent framing pillar. To prevent the two tectonic structures from becoming overly independent of each other, Hoffmann sets an optical mediator between the two in the form of the yellow pore filling. Rubbed subtly into the surface of the black-stained oak wood, they not only reflect the colour nuance of the gilt frame elements, but impart an effect of depth to the smooth surfaces and set them a-glimmer as well.

Archives of the Hochreit Hunting Lodge 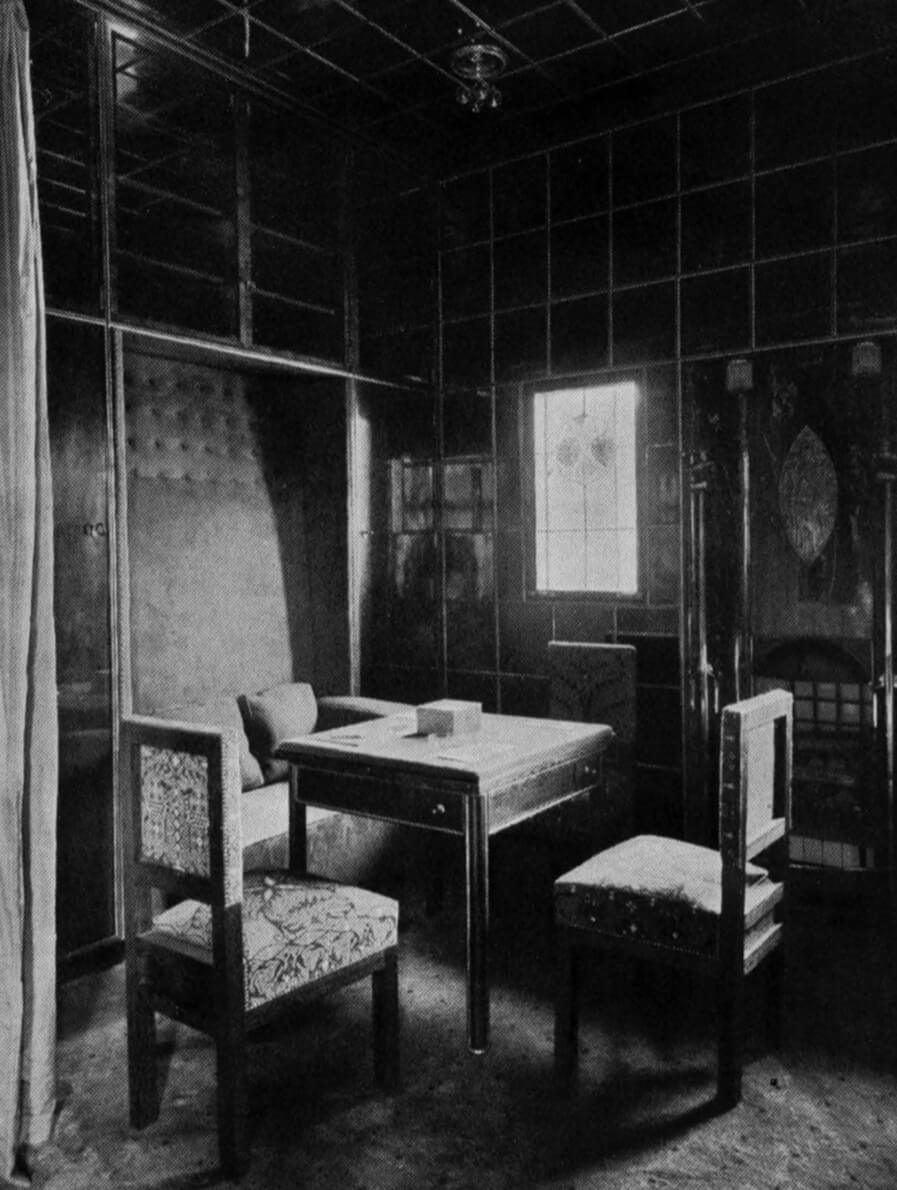 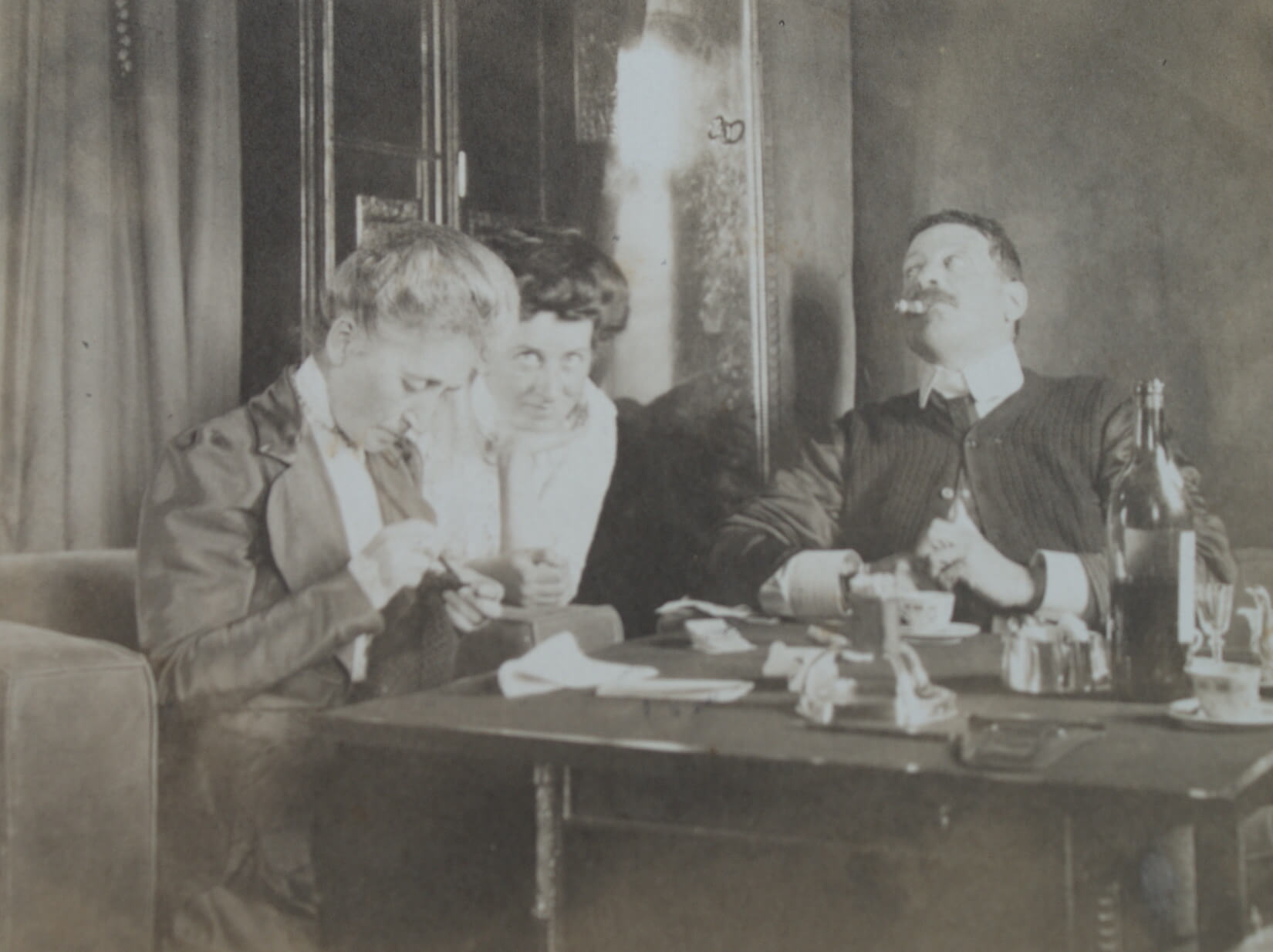