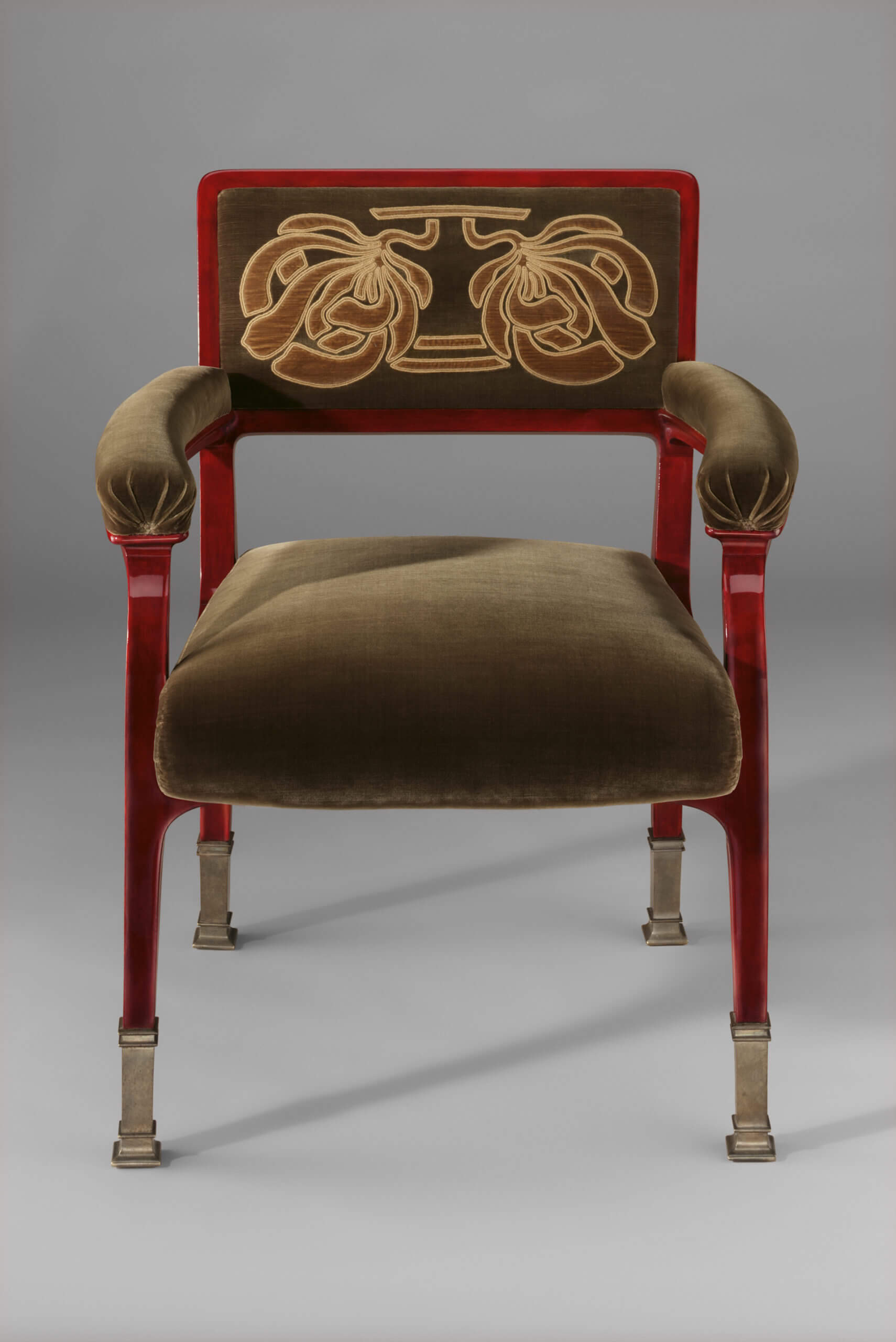 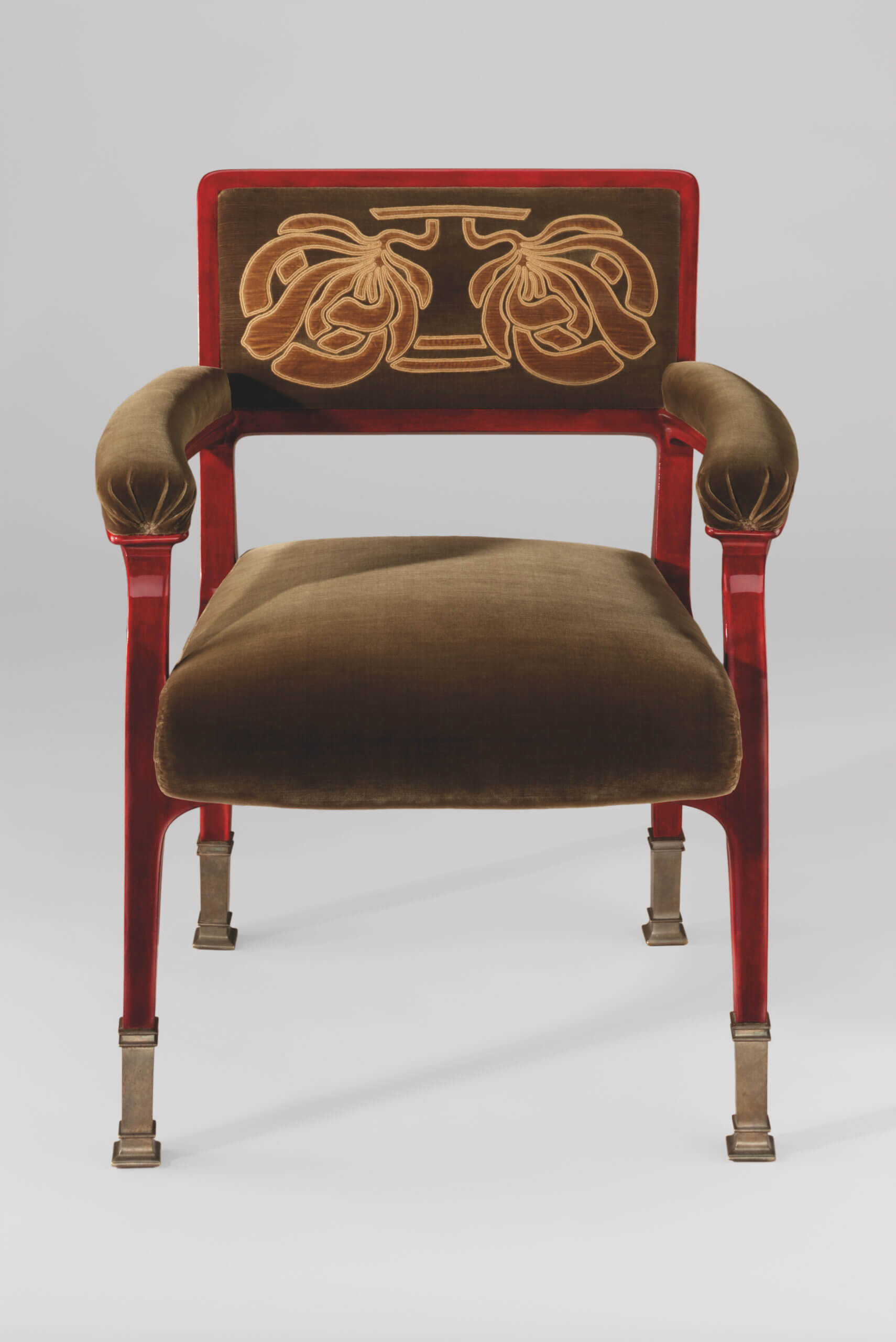 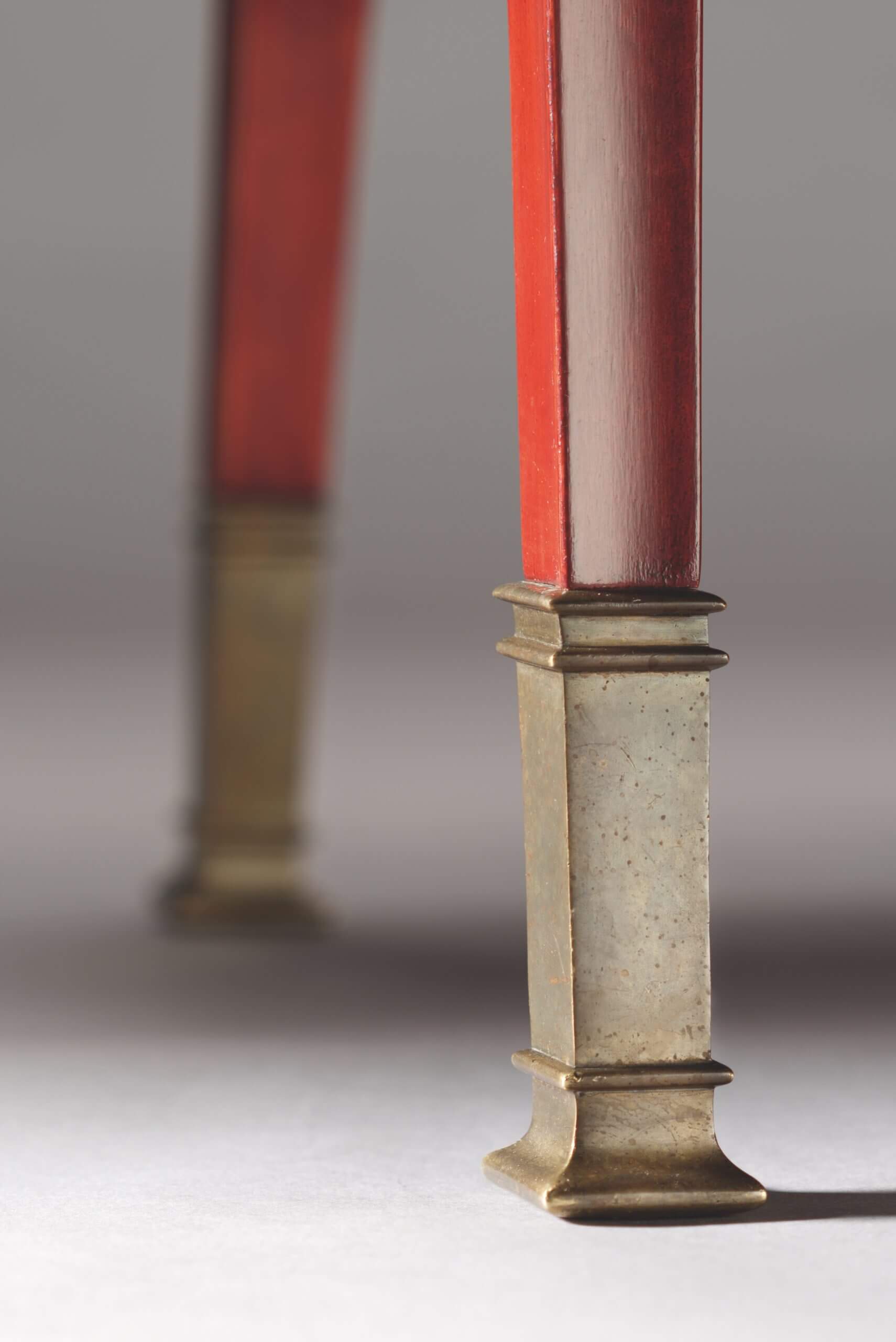 His theoretical ideas on architecture and his work in designing had made Otto Wagner the dominating force on the architectural scene in Vienna ever since the 1880s. He was the first to recognise the necessity of a break with the aesthetic tradition of historicism. Aspects of social politics and economics convinced him that a new style had to be developed, corresponding to the requirements of modern life. He defined this for the first time not from an aesthetic angle but by focusing on the function of the set task. So he extended the creative dimension of the designing process by integrating practical elements, which in the end led to the evolution of his “utility style” and the hypothesis: “Anything that is unpractical can never be beautiful” – thus he became the father of the modern movement in Vienna.

This armchair exactly corresponds in design to the model Wagner created in 1900 for the presentation of the Austrian engineering association at the Paris World Fair. The sole difference is its colour scheme. The Paris stand and its furnishings were red, whereas the wood of this armchair is stained green and the upholstery executed in green with red application work. For Wagner, the colour scheme is a key medium in defining the functional and hierarchic status of a piece of furniture. We know for instance that Wagner’s bedroom in his house on Rennweg (1892) and in his apartment on Köstlergasse (1898/99) has green as its basic colour, while red dominates in the Rennweg salon and in the governor’s office in the Postsparkasse (Postal Savings Bank – 1906). The presentation of the the k. u. k. Hofgarten Direktion (imperial and royal Court Gardens Office) in the Palais d’Horticulture at the Paris World Fair likewise designed by Wagner was arranged like a reception room with benches and armchairs and accordingly also fitted out in the hierarchically elevated colour of red. Therefore the original functional context of this armchair cannot be securely reconstructed on account of its different colour scheme. However, it is the only example of this design in which the original fabric application is preserved.

Aesthetically speaking, the armchair design thoroughly blends in with Wagner’s stylistic development from the classically influenced forms of the 1890s to the dominantly curvilinear forms of the years 1897/1900. It reflects the pivotal transition towards Wagner’s independent, functional style, liberated from historical examples. The chair is emphatically frontal, manifesting an abstract version of a classicist armchair with simultaneously round and angular, and soft and hard contours. Also stemming from the classicist repertoire of forms are the back-curving rear legs, connected with fluent thrust to the backrest. The influence of the French-Belgian curvilinear zeitgeist is evident in the subtile concave surfaces of the armrest front sides, the front and side seat frames, and the volute join of armrest and backrest. This is most overtly expressed however in the fabric application, which is restricted to the backrest. For Wagner, this technique had been a favourite means of expression for interior design ever since the 1880s. It can be found in his interiors on wall linings, curtains, seating decorations and on bed quilts and tablecloths. Among the most elaborate and sophisticated works of this nature – recalling mural paintings – are the wall linings for his own bedroom in the Köstlergasse apartment (1898/99), for the waiting room of the Stadtbahn Hofpavilion (the urban railway court pavilion – 1899) and the atelier of his first Hütteldorf villa (1899/1900).