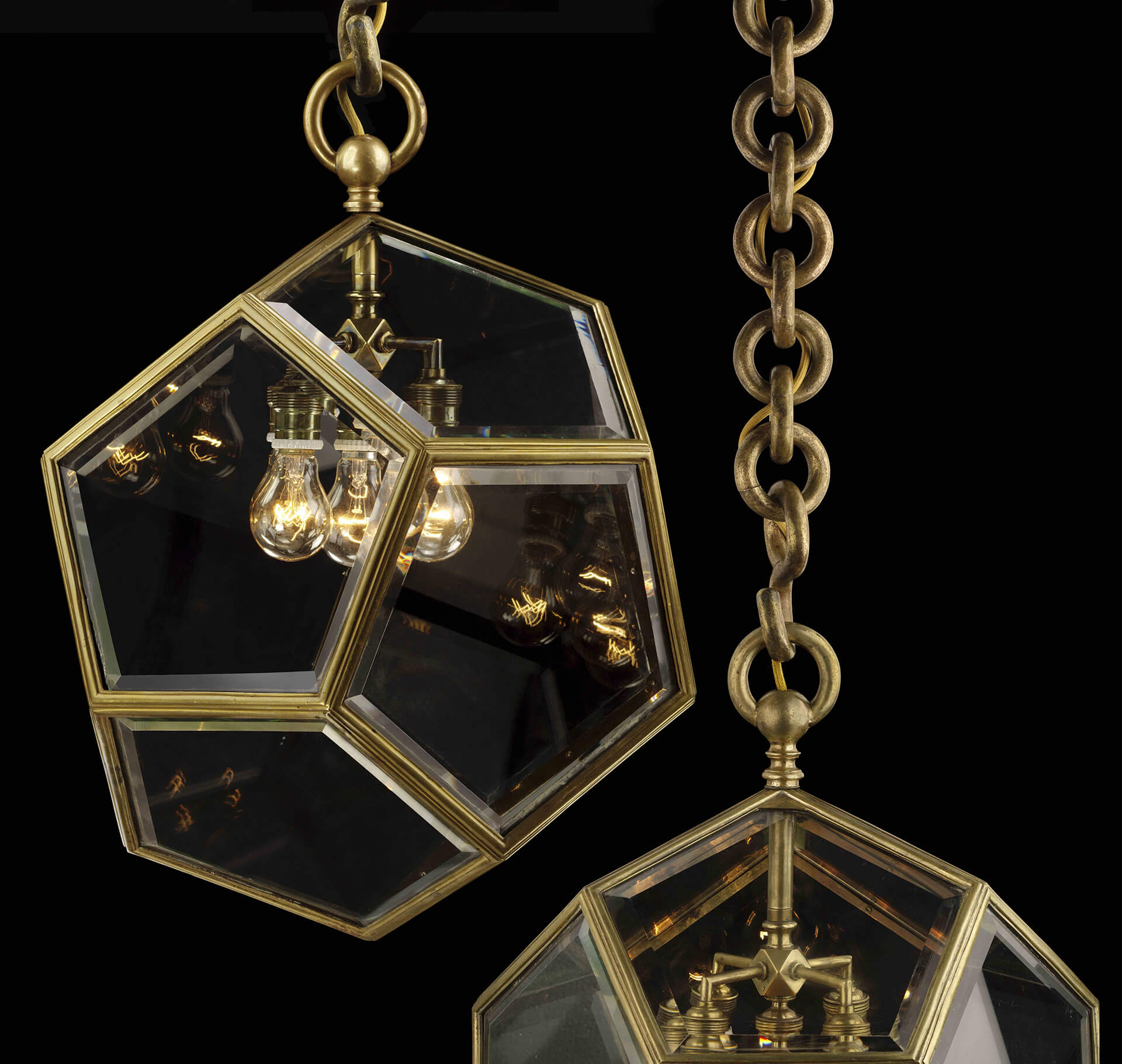 Executed and distributed by

The design philosophy of Adolf Loos presupposes that solutions to given tasks should be based on a principle and independent of short-lived fashions. An object of furnishing does not reflect the self-importance or image of its owner, but should cope with the demands of everyday life in as functional and cultivated way as possible. Accordingly, the former premise slips into the background and the human being to the fore. This attitude made Loos the pioneer of modernism and the international style, and this ceiling lamp fits into the scheme. Designed by Loos as a dodecahedron, he integrated it into interiors planned for various patrons between 1906 and 1927. It was adopted into the products catalogue of the Friedrich Otto Schmidt furnishings company, which sold it independently of Loos.

For Loos, the choice of this luminaire model as light source was not connected to a specific patron,  but complied with its installation location; this determined the illuminance quality and mood. So when analyzing this model the following features strike the eye. The form of the dodecahedron, like a spherical luminaire, is capable of an equivalent illuminance of the surrounding space in all directions. Neither horizontals nor verticals dominate. The clear glazing allows the light source to be seen from outside; it does not generate a subjective mood value, but emits a sober and functional light with equal intensity on all sides. The body consists of twelve congruent glass pentagons assembled together. If beveled at the sides as here, this causes a multitude of light refractions producing a material- immanent mood value. This brilliance is enhanced by the profiled copper mounting of the individual pentagons, yielding a richness based on plain function which does not steal the show and therefore manifests the quality, so important for Loos, of cultivated naturalness. Last but not least is the dimension of movement, which galvanizes the static object as the beholder changes point of view. The light glitters and beams in the truest sense of the words, filling the room with its radiance. 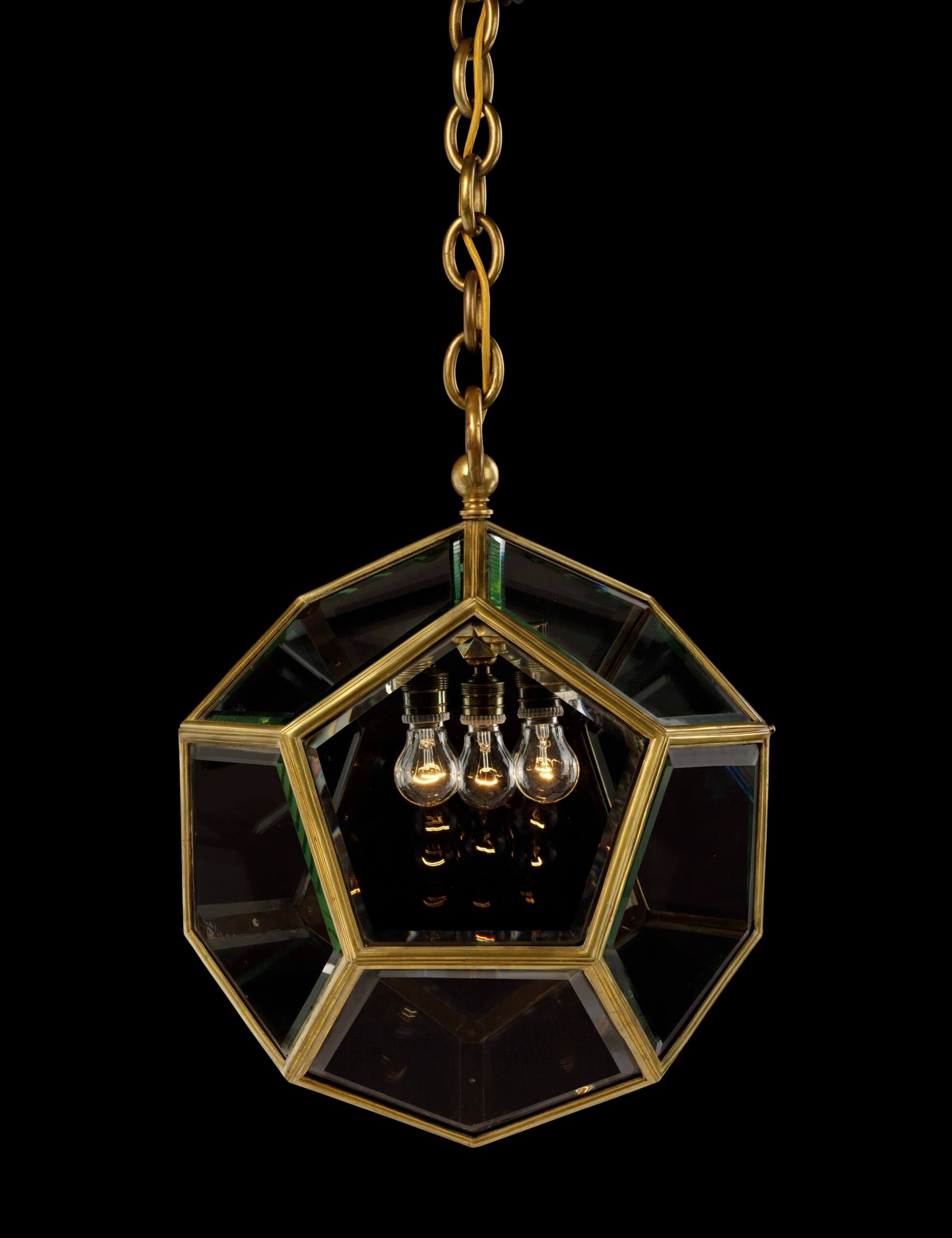 If we consider the various locations chosen by Loos to install his luminaire, its versatile functionality becomes even clearer. In principle there are two options for its use – one private, the other public. In private homes (bay window of the smoking room in the Friedmann apartment, Vienna 1906/07, bay window of the music room of the Hirsch apartment, Plzen (Pilsen) 1907/08 and the becks’ dining room 1908) loos deploys the dodecahedron lamp in a shrunk version simply as extra lighting. It was mounted in four corners of the Hirsch music room, augmenting the central lamp over the dining table, thus enhancing the feeling of space without dominating it. As central illuminant of an bay window it can define this interior in combination with a larger adjacent room as an autonomous, extra spatial volume.

On the other hand, the large version of the dodecahedron luminaire is to be found exclusively in the public space: the Knize tailor salon (Vienna 1910/13 and Paris 1927/28). Here, where there is no demand for privacy, it can unfold its whole potential and fulfil its task as a space- encompassing light source with equal distribution throughout the room. In both cases it relates to the entire interior space and requires symmetrical hanging. 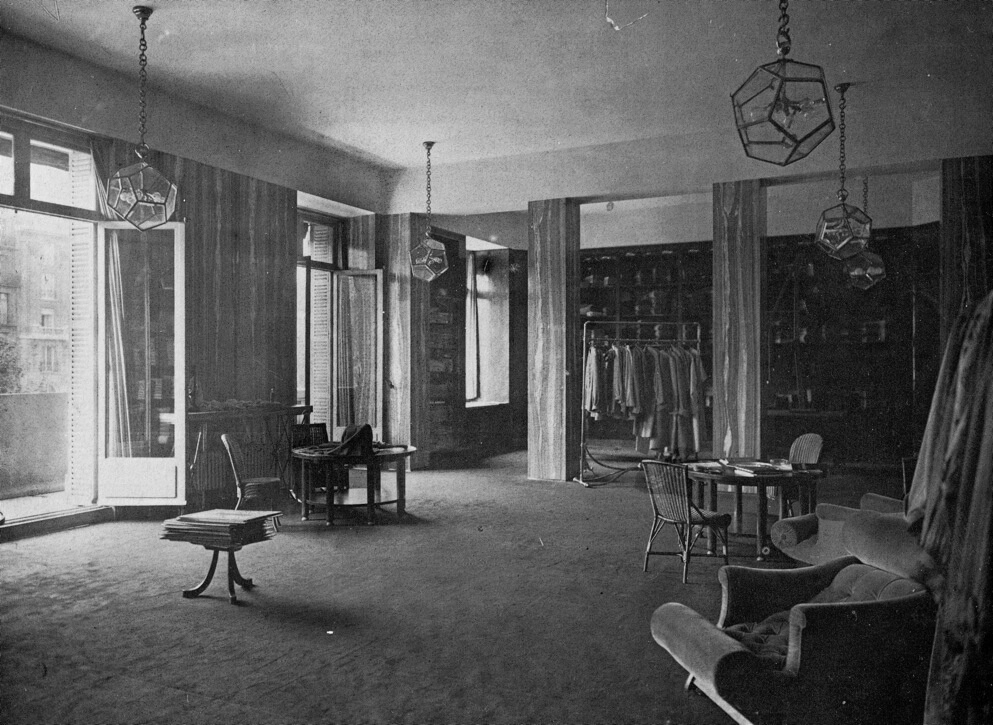 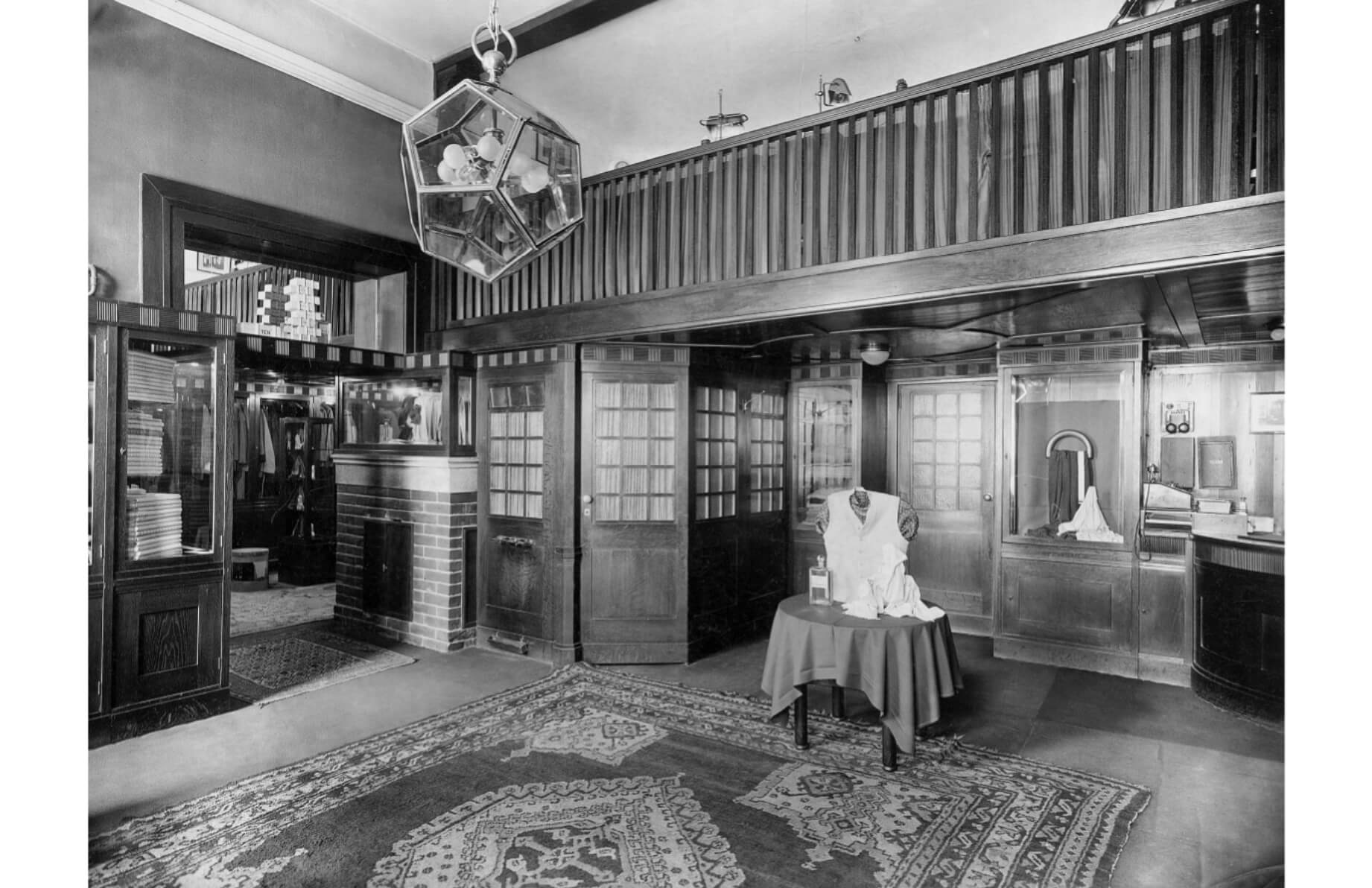 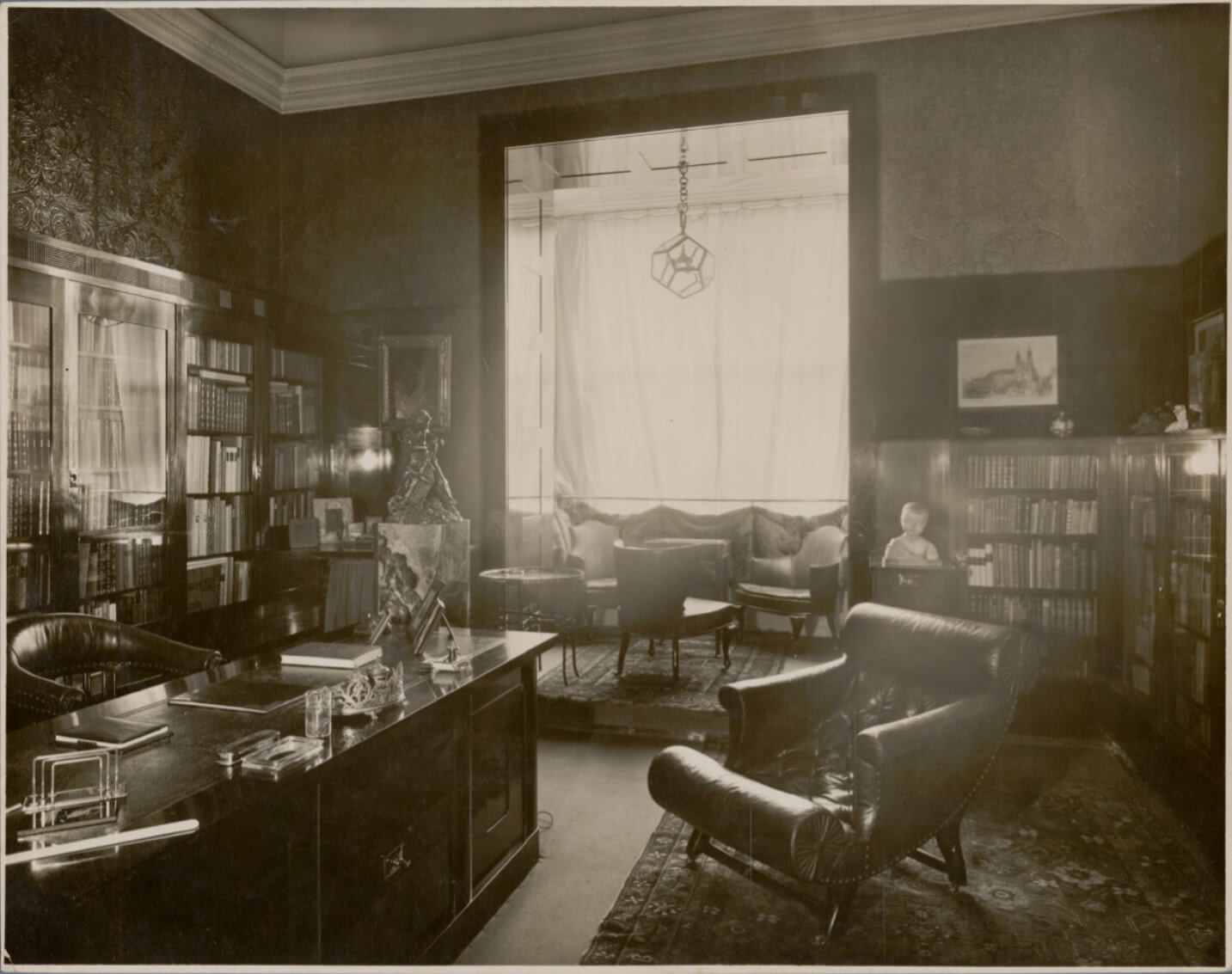